You’ve probably inherited a box of old 8mmm film or stumbled upon the film roll that your grandparents or parents tucked away in the attic or garage.

These films were a must-have somewhere in the second half of the 20th century. They were a phenomenal way of preserving precious memories for generations down the road. 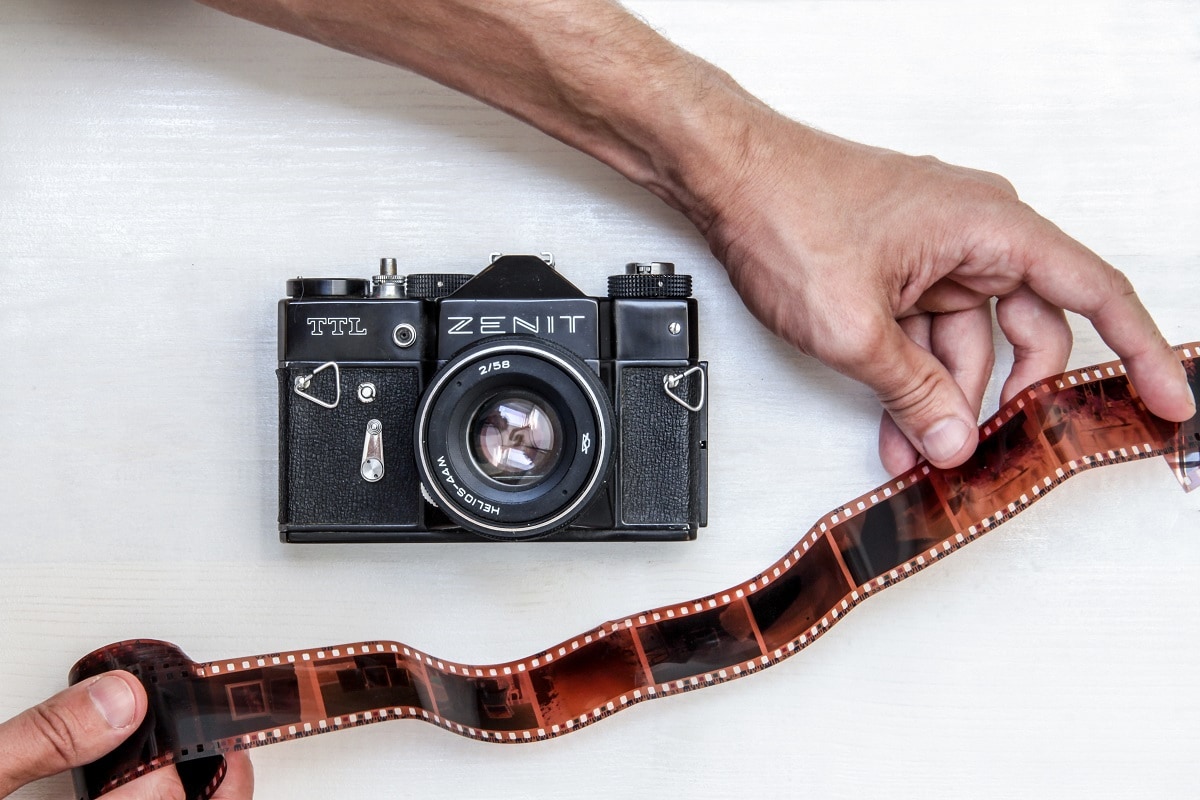 So, it’s no surprise that you desire to convert 8mm film to a digital format which can then be stored, watched, and edited indefinitely.

You and future generations can take an infinite number of trips down memory lane.

What You Need For the 8mm Film Conversion

You can go about the conversion process in different ways.

However, with the barrage of automated gadgets that have engulfed today’s market, selecting the best one can be challenging.

To the unfamiliar eye, they’re all the same. So, we’ll explore the best conversion equipment to buy, that’ll give you value for your money. Read on!

Are you on the quest for affordability and efficiency rolled into one? Then the Wolverine Digitizer is right up your alley. It churns out high definition (HD) footage with a resolution of up to 960 X 720 dpi at a fast rate of 30 frames per second. Armed with a 3.53MP 1/3″ CMOS sensor, the device converts photons to electrons and is compatible with 5-inch or 3-inch reels. The converter also furnishes users with topnotch exposure control as they have free rein to manually or automatically set the controls. 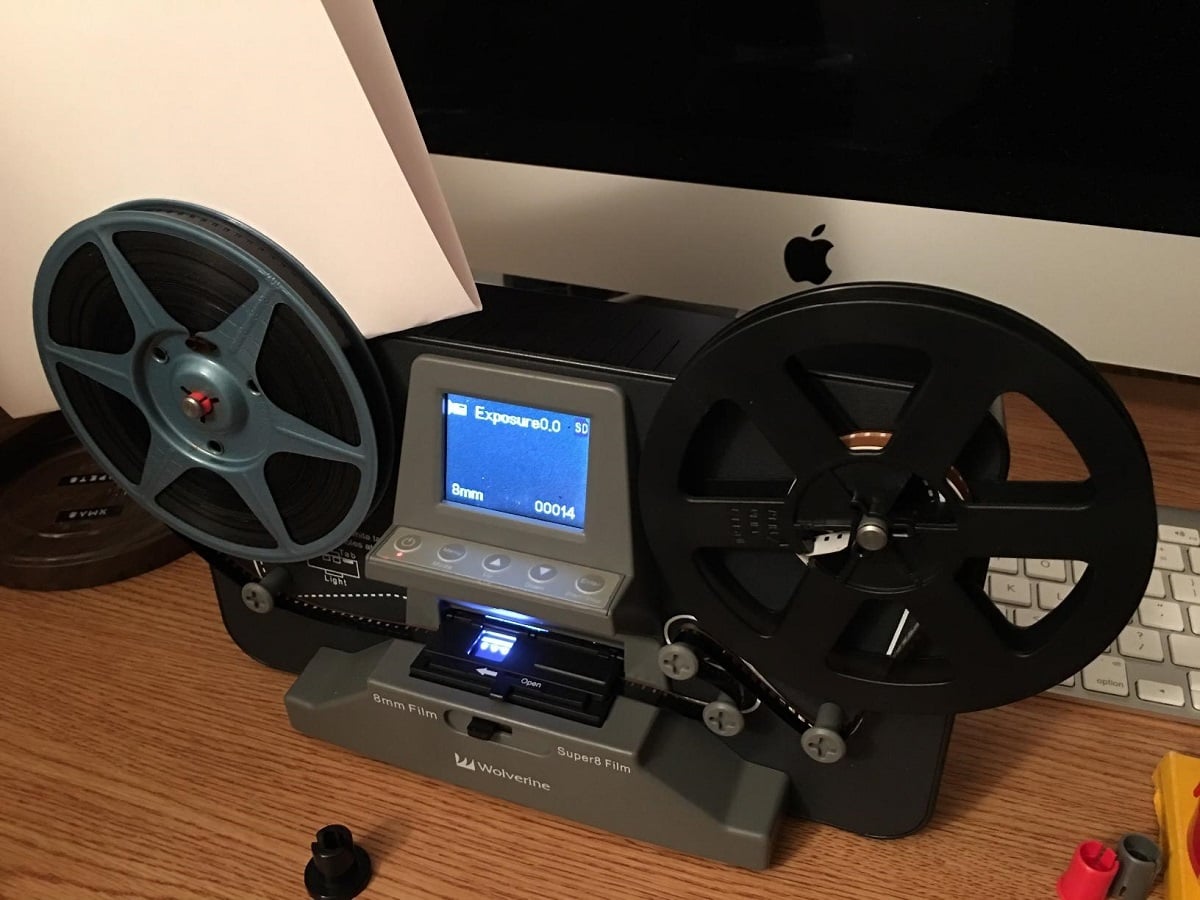 Once the device has begun processing the film, the footage is stored onto a 32-GB memory card until it’s ready for transfer or viewing. The Wolverine Converter also has a USB 2.0 port which allows you to effortlessly link it to your PC or TV-Out port for the video display. 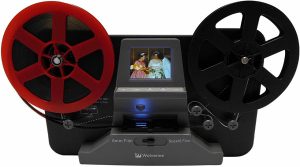 It’s a simple device that’ll convert your 8mm films into a digital format, in a jiffy. Just like a generic projector, all you have to do is mount the 5-inch or 3-inch reel, jerk in a memory card, click a few controls, and you’re good to go. The digital converter pays for itself factoring in that most photo labs today charge more than a dollar to convert one foot of film. Nonetheless, you’ll need to keenly monitor the device to stop the splices from getting caught up. 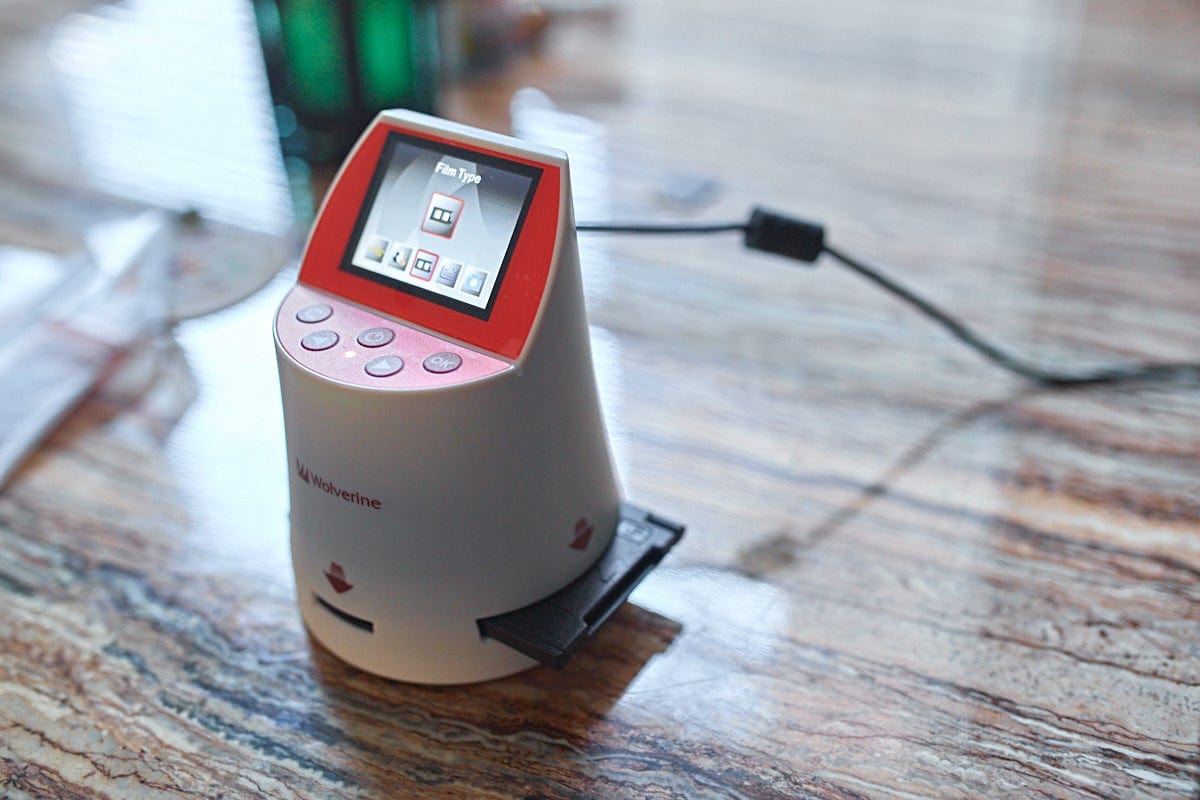 It has the uncanny ability to work with several film types such as 8mm. Like other topnotch digitizers in the market, this handy device allows you to view your converted footage on the F2D. It’s armed with a 2.4” color screen from which you can delight in the digitized videos. The Wolverine F2D Mighty 20MP 7-in-1 Film to Digital Converter stores the footage onto a memory card until it’s ready for viewing or editing. It also allows you to modify the exposure coupled with the color balance manually or automatically, based on your preference. 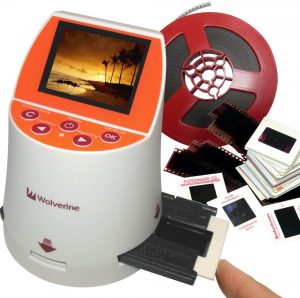 It’s the go-to product if you have no experience with films or reels as it’s simple to use. With just one touch of a button and no additional software required, you can convert your film into digital footage in seconds. And, you can use the device right off the bat by plugging it into a generic USB port or AC outlet. However, keep in mind that you may experience inconsistent color quality or grainy footage at times. 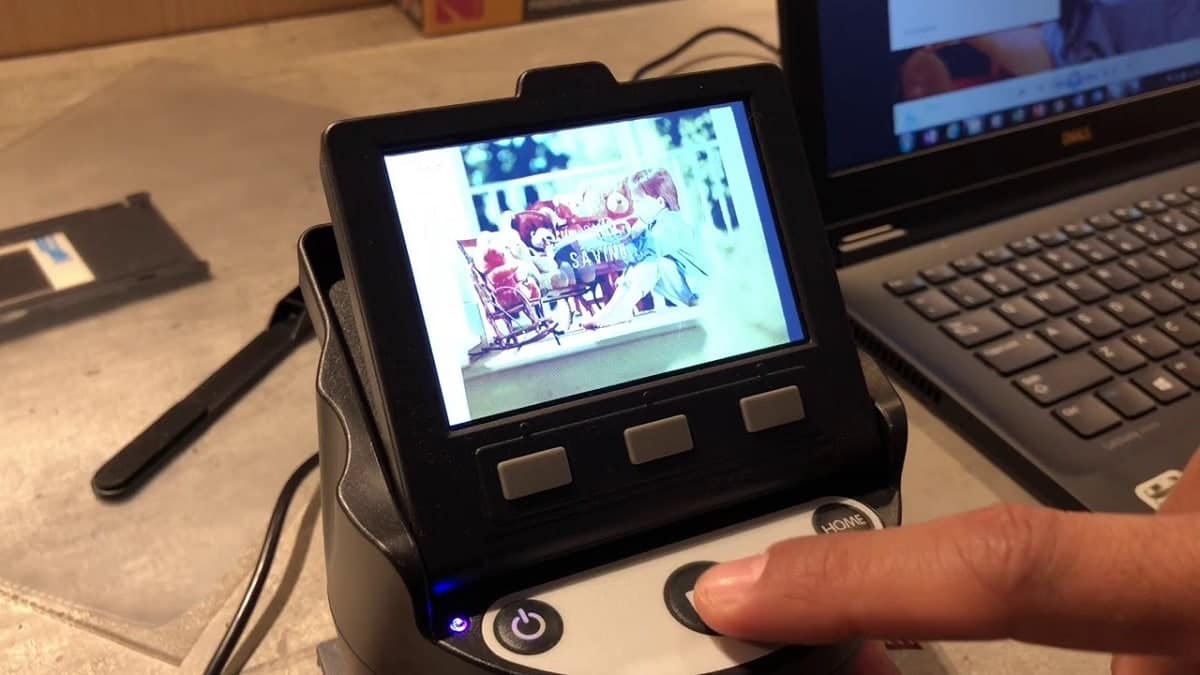 Some of the key features that make this handy gadget stand out from the rest are the angled 3.5″ LCD and video out, coupled with USB and HDMI connectivity. Packed with a high resolution of 4320 X 2880 dpi that can get up to 5728 X 3824, the device is easy to use. With a single press operation, the KODAK SCANZA Digital Film & Slide Scanner is unarguably one of the easiest options to buy. You can conveniently modify the color quality, contrast, exposure, and brightness courtesy of the blue, green, and red levels included thereby generating excellent scan quality. 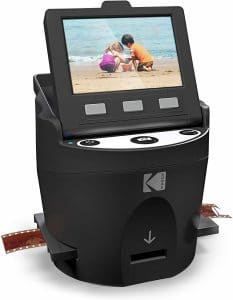 You can’t go wrong with the KODAK SCANZA Digital Film & Slide Scanner if you’re looking for a product that’ll get the job done in a jiffy. Along with being extrapolated to a high resolution of 5728 X 3824, the device comes with a tilted 3.5” LCD screen. But, it can only convert film to JPEG format.

Packed with a screen that’s larger than other digitizers in the market, this device delivers a high resolution of 5472 X 3648 pixels in a couple of seconds. The Wolverine Titan 8-in-1 High-Resolution Film to Digital Converter has a larger screen compared to other digitizers and is armed with a small USB slot and HDMI TV output. When it comes to diversity, the gadget also supports the conversion of various film types, such as 127mm, 8mm, 35mm, APS format, 126mm, and 110mm. 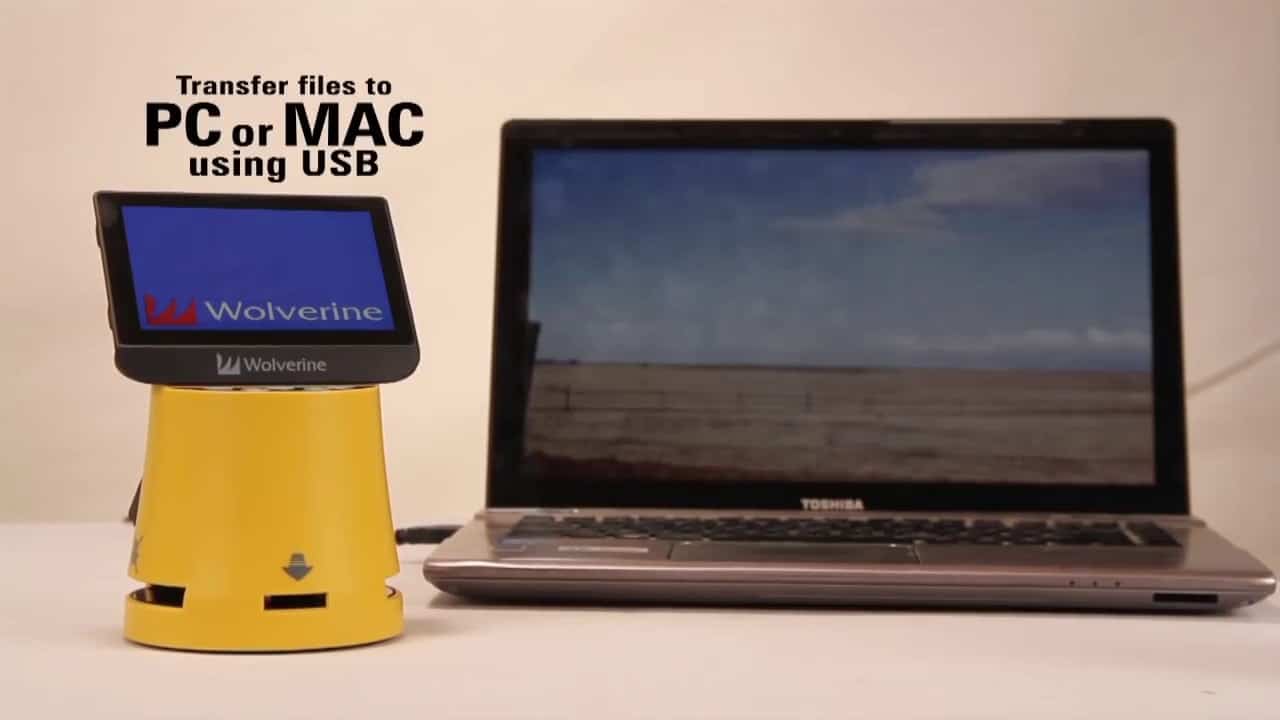 You’ll be pleased to learn that the converter comes with speed-load adapters that are a beast in ensuring fast and seamless scanning. The footage is then stored in JPEG format in an SD card or its internal memory. The swift conversion can be attributed to the device’s LED backlight single operation. 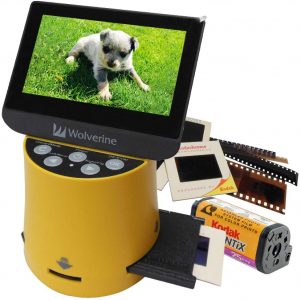 The converter is the perfect option if you’re looking for a stand-alone system that gets the job done in seconds courtesy of the unique speed-load adapters. It’s easy to use and allows you to save the converted footage to a memory card or its internal memory. However, the Wolverine Titan 8-in-1 High-Resolution Film to Digital Converter is ideal for well-lit footage as it distorts the color balance of darker footage.

Are you seeking a product that’s all about convenience? Then you can call off your search because the Magnasonic All-in-One High-Resolution 22MP Film Scanner is here to swoop in and save the day. It’s packed with a 2.4-inch LCD color monitor for previews. 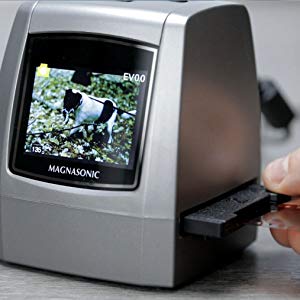 Armed with a memory card slot, this device gives you more storage for your digital images. Along with a video-out TV cable, the handy gadget churns out digital footage in less than 5 seconds which is nothing short of impressive.

It outputs each 8mm film frame with a high resolution of 22MP courtesy of a plug-and-play interface. And, with no additional software required, the process doesn’t get any easier and faster than this. The Magnasonic All-in-One High-Resolution 22MP Film Scanner pre-installed film files eliminate the need for editing software. 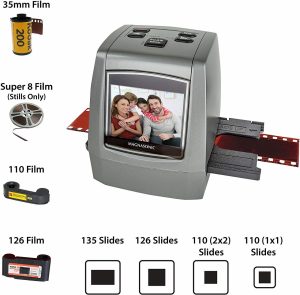 It’s a beast in effortlessly converting 35mm, 8mm, 110mm, 126mm, and Super 8 film negatives into premium resolution JPEG images. Courtesy of the inbuilt 128MB memory, you can save up to 100 images onto the handy device. Nonetheless, the 2.4-inch view screen is small, compared to other options in the market. And, it only converts images. So, you may want to look elsewhere if your goal is to convert any footage.

It’s a no-brainer that your 8mm and Super 8 films that are tucked away in your attic or garage are degrading by the day. However, this high-quality device is the Holy Grail that’ll allow you to relive those beautiful memories. 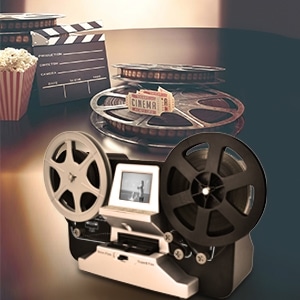 The 8mm & Super 8 Reels to Digital MovieMaker Film Scanner, comes with a 32GB memory card, USB cable, and TV cable slots. This makes the sharing, editing, and saving of these wonderful memories, a breeze. A power adaptor and cleaning cloth are also part of the package. So, you can kick-off the conversion process right off the bat without needing the help of other tools. 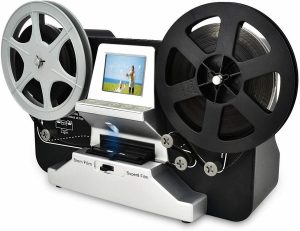 It’s the go-to product if you’re looking to convert Super 8 and 8mm films into topnotch quality digital footage. The 8mm & Super 8 Reels to Digital MovieMaker Film Scanner, is easy to operate and is compatible with Mac, Windows, and Linux PCs. However, the 2.4-inch full-color LCD is small compared to other devices.

It’s the mini version of the KODAK SCANZA mentioned above. So, with a 2.4-inch LCD screen and a 32GB memory slot, the KODAK Mini Digital Film & Slide Scanner is cheaper but gets the job done. It also comes with the same 14-Megapixel CMOS sensor as the SCANZA counterpart and has the uncanny ability to scan 8mm, 135mm, 110mm, Super 8, and 126mm, films. 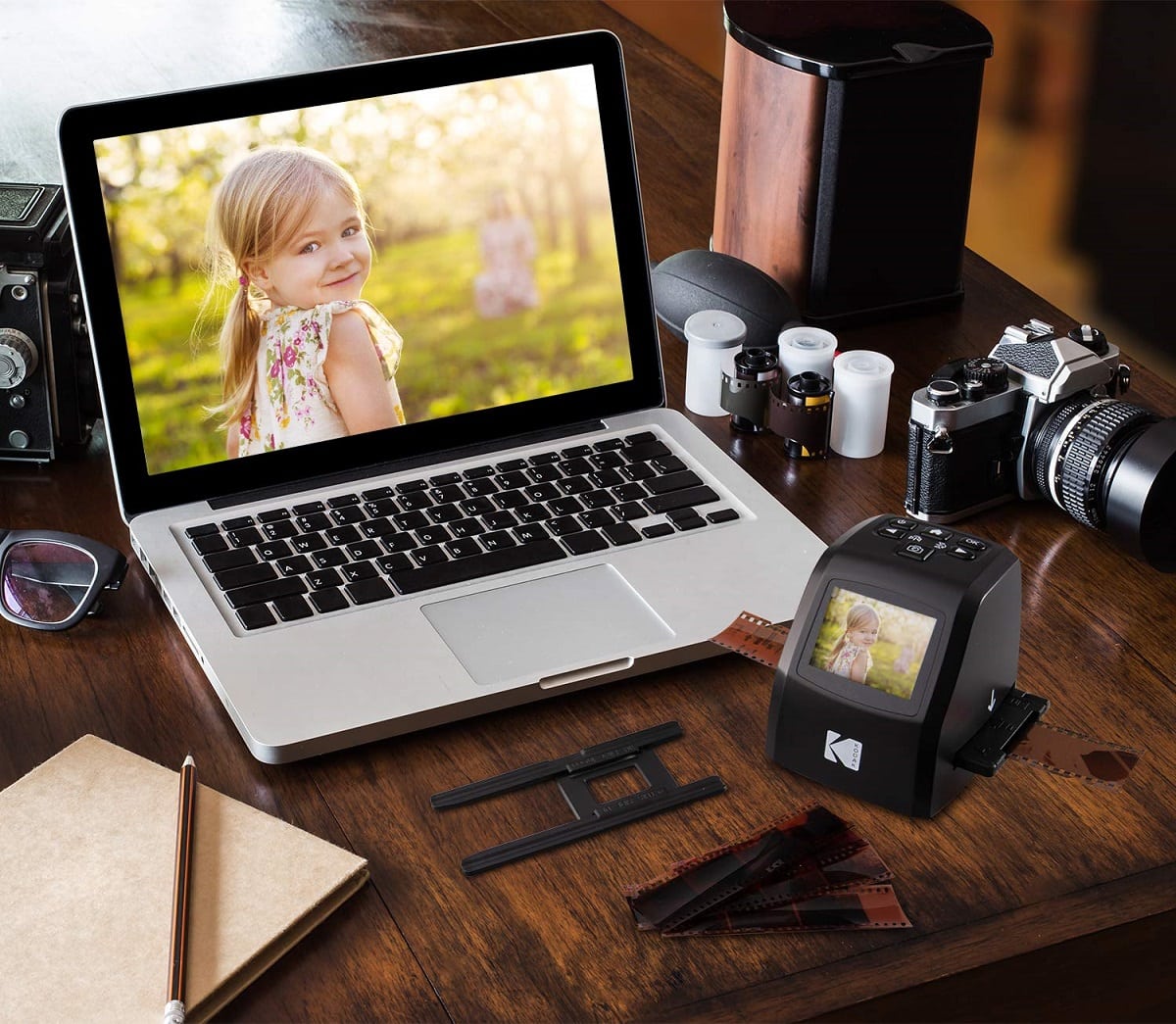 Despite the absence of adapter trays and slide inserts to safely load the films, the KODAK Mini Digital Film & Slide Scanner is a standalone device. Therefore, it doesn’t require connectivity to another device to function. 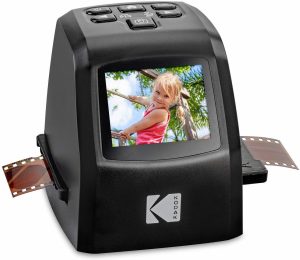 If you’re seeking an affordable solution that steps up to the plate, the KODAK Mini Digital Film & Slide Scanner is one of the best 8mm film converters. However, if you want a device with larger screen size and can convert films to videos, then you may want to consider other options.

Investing in the best 8mm film to digital conversion equipment comes with a set of perks, as discussed below.

Prevent the Loss of Data

8mm films are fragile and are susceptible to disintegration or damage with time. Once this happens, the memories are lost forever. So, if your goal is to salvage them, then a digital converter is your best bet.

It’s no secret that new technologies replace the old ones at an astronomically high rate. So, 8mm films are no different. Gadgets like projectors that are needed to watch your film are becoming a rarity in the market. A few years down the road, they’ll be obsolete. So, by converting your 8mm film to a digital format, you can relive those precious memories on nearly all devices.

By converting 8mm to a digital format, you can easily make copies and share them with others in the blink of an eye. When it comes to convenience, this beats using a generic projector.

8mm films sit on reels thereby occupying a significant amount of space. However, converting them to a digital format doesn’t occupy physical space because they can be stored on the cloud. As a result, there’s no hassle of protecting the delicate 8mm films from damage.

Below is some insightful information that’ll aid in choosing the best 8mm film to digital conversion equipment.

What are the different types of 8mm films? – Before hastily choosing a product, keep in mind that 8mm films fall into 4 categories.

Should you clean your 8mm film before using a digital converter? – Yes! While the old film was tucked away somewhere, it probably gathered dust and is dry. So, for optimum results, clean it before digitizing it with your respective converter.

What’s the best way to clean an 8mm film? – Fold a silicon cloth like a pad then clean both sides of your 8mm film. But, do so gently to avoid breaking or damaging the film.

With the advent of technology, the only way to pass on the amazing memories is by investing in the top 8mm film to digital converters. While selecting just one can have you entangled in a web of confusion, our reviewed products make your search a breeze.

On the flip side, some of your converted footage may not have sound. Nonetheless, getting half the pie is better than no pie. Don’t wait for tomorrow and risk losing your priceless memories forever. Order a digital converter today!

Did we leave out any impressive digital converters? Let us know in the comments below. We’d love to hear from you.

HereON.biz is a participant in the Amazon Services LLC Associates Program, and we get a commission on purchases made through our links.