Review: Cubii Under Desk Elliptical – Worth Your Money?

Have you heard it said that sitting is the new smoking?

It seems unlikely that sitting could be as damaging to health as smoking but there is undeniable evidence that spending the majority of the day sitting is not doing our health any favors.

Many are finding ways to get some exercise in while sitting at work all day.

The Cubii Under Desk Elliptical, making tech news this year, is one way to get some exercise while sitting and getting some work done.

By offering a convenient and discreet way to move while getting work done at your desk, the Cubii arrived to solve big health and fitness problems for the average desk worker. 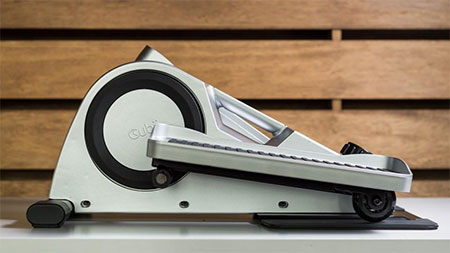 Most under-desk exercisers push the idea that they are easy to use and let you get a good workout without interrupting the flow of the workday.

Few of these elliptical trainers, however, manage to live up to the claim. 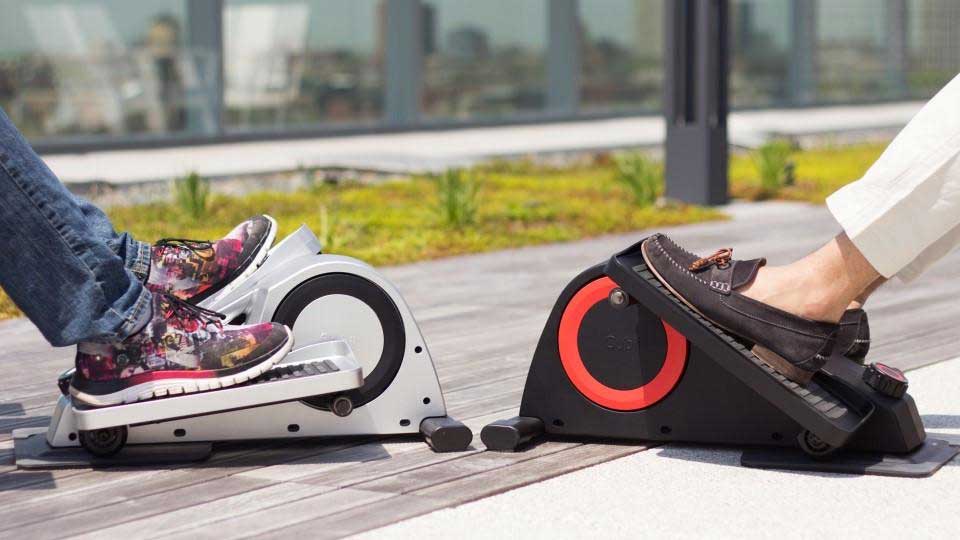 The Cubii stands out for being both small and discreet while also offering an ergonomic design that allows for a good calorie burning workout, even while working or playing video games.

It fits under the desk easily and doesn’t draw attention to itself.

Adding to the discreet factor is the noise level.

The Cubii isn’t silent but it only produces a low hum that is similar to white noise. This means it won’t distract colleagues like a treadmill desk or other exercise equipment.

If you’re using the Cubii at home on the couch, the sound won’t overpower the television.

The ergonomic design fits under your desk, and minimizes the amount of leg movement required, meaning you won’t have to deal with your knees bumping up against the desk.

Even desks with a keyboard tray should be ok!

Although the movement is minimal and doesn’t compare to standing desks, you can still get a decent workout without having to think about gym memberships.

With the adjustable resistance, You also have the flexibility of choosing from eight resistance levels.

Video Review By Business Insider
You might want to stick with a lower level of resistance while on a conference call but you have the option to push it to a harder level later in the day.

It also ships with a chair wheel stopper, very handy for most of us who use a wheeled office chair.

It seems like just about everything has Bluetooth connectivity these days.

The Cubii’s Bluetooth connectivity isn’t just following a trend, though. 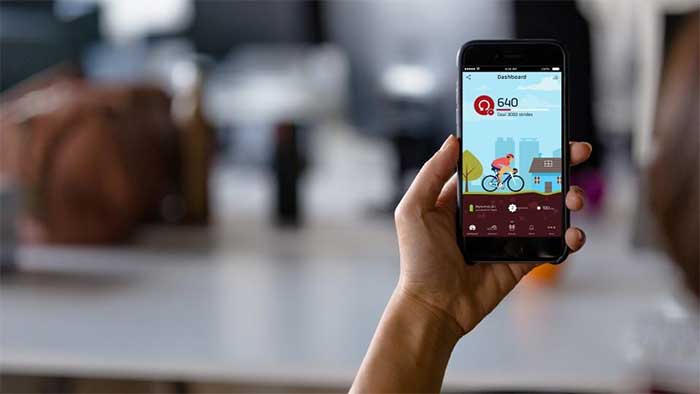 By letting you connect to the Cubii app (IOS – Android), the Fitbit fitness tracker app, or Apple HealthKit, you have flexibility and control.

Stats and health data have been shown to help improve motivation and follow-through for those trying to commit to exercise programs.

The Cubii wireless connectivity helps the user tap into that on their quest for better health.

The Cubii app also goes far beyond the elliptical workout and lets you track diet and even lets you compete in challenges with friends or other Cubii users from around the world.

Many of the most popular forms of exercise end up causing new or additional strain to the body.

Intense workouts, and High-impact exercises like running, for example, can cause significant stress to the knees and other joints.

The Cubii elliptical features an extremely low-impact kind of exercise, making it a great choice for people with injuries. 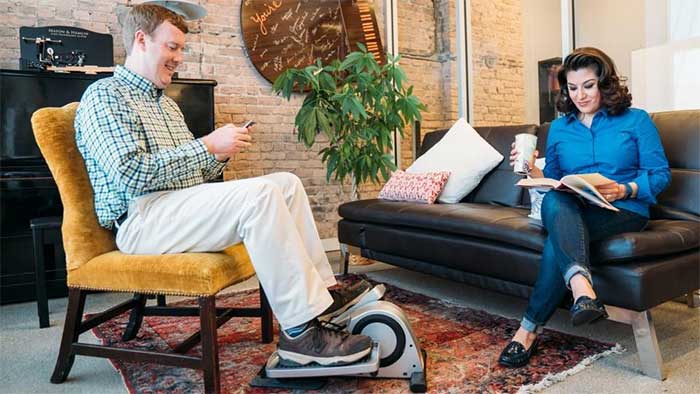 The small range of motion and smooth movement of the elliptical offers a workout that is almost relaxing for the knees and other joints.

The Cubii is a low-impact exerciser but it’s also a way to experience what researchers call active sitting.

Sitting all day, every day is thought to increase the risk of all kinds of health problems.

Active sitting is a way to make sitting more dynamic and better for you.

The Cubii helps you to sit with better posture and engages the core while also allowing for movement and some low-impact exercise.

It’s also known to increase overall energy and productivity, something most people would find a welcome addition to the workday without having to rely on bigger fitness equipment.

The primary difference with the Cubii Jr. is the lack of connectivity to an app. 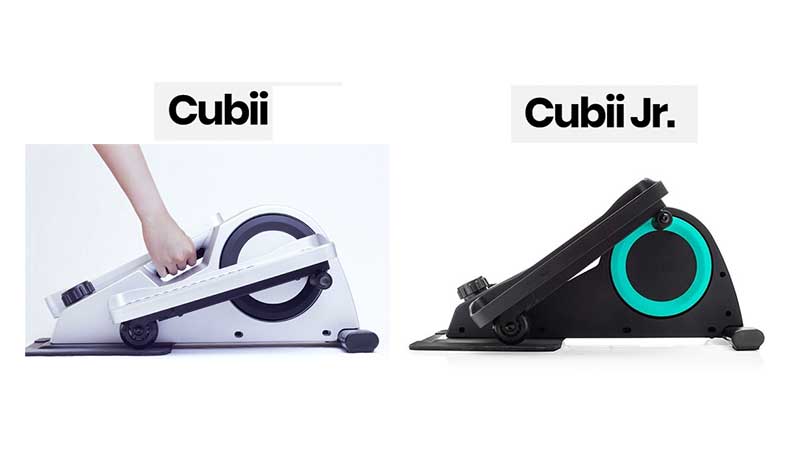 The Jr. is not Bluetooth enabled so it doesn’t connect to the Cubii app or the Fitbit app or Apple HealthKit (for tracking calories and other features).

The Cubii Jr. does have a built-in display monitor to show the user relevant workout stats.

Other than the difference in wireless connection, though, the two under desk ellipticals from Cubii are essentially the same.

Both are ergonomically designed and offer eight levels of resistance.

They are both sturdy and well made and offer a convenient under-desk workout. 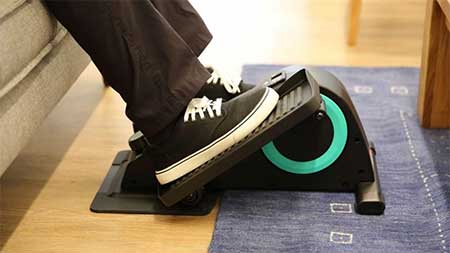 At the time of publishing this review, Over two hundred customers have reviewed the Cubii on Amazon, with the overwhelming majority giving a positive opinion.

Customers love that it is discreet, easy to put together, easy to use, and well made.

Users report that it’s a great way to add a bit of activity to the workday, helps get your legs moving and lose weight (by increasing your heart rate).

Some even report that they lost weight after starting to use the Cubii. One mentioned he ditched his exercise ball. 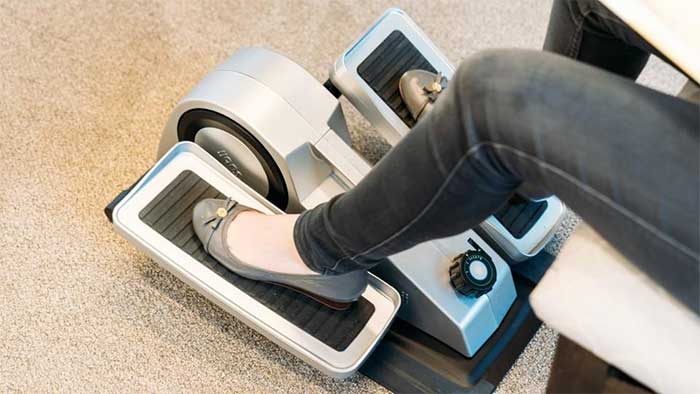 Although some reviewers do praise the Cubii’s mobile app, others complain that it is a major battery drain and that it doesn’t offer too much in terms of value compared to cheaper options like the stamina inmotion desk elliptical trainer.

Some say that Bluetooth connectivity is a consistent challenge. While some people aren’t happy with the Cubii app via bluetooth, many people describe being happy with the ability to connect the Cubii with the Fitbit app.

And one consistent refrain throughout the Amazon reviews is that Cubii has great customer service, always reaching out to customers with solutions for any issues they are having with the product.

Is the Cubii Under Desk Elliptical Worth Your Money?

The Cubii is worth your money if you want a convenient and low-impact way to add some activity to your workday.

For those looking for a low-impact way to add some exercise, the Cubii is a good option.

It’s especially worth your money if the idea of being able to connect to your exercise data through apps is appealing.

If you want a convenient under-desk workout but don’t care about being able to connect with an app, the Cubii isn’t worth your money and the Cubii Jr. is a better fit.

The daily grind doesn’t have to mean a drain on your energy and a harmful effect on your overall health. 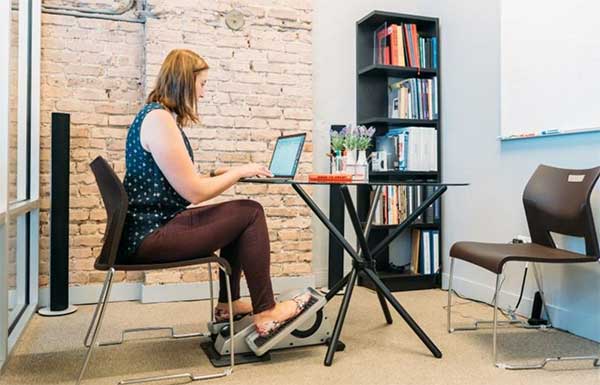 With the Cubii under-desk elliptical machine, you can be productive while getting a low-impact workout.

It’s small and quiet, letting you exercise discreetly without bothering others.

The Bluetooth connectivity option lets you integrate your exercise with a number of apps. You can track your health data and even turn exercise into a fun and friendly competition.

All in all, the Cubii costs a bit more than most other under-desk bikes, standing desks and treadmill desks, but it is truly a premium product with a premium feel.

It is a good way to ensure that you don’t suffer from the ill effects of sitting too much.

HereON.biz is a participant in the Amazon Services LLC Associates Program, and we get a commission on purchases made through our links.

Need to stay active at your Desk? Why not try an under-desk elliptical?